The halls
The Arsenals
The History

The exhibition of “Le Navi Antiche di Pisa” is hosted in the rooms and the aisles of the Arsenali Medicei” (the Medicean Arsenals) in Pisa. It is divided into eight sections.

I. The city between the two rivers

The first room of the Museum is focused on the history of the city of Pisa between archaeology and legend. It deals with its development up until the Etruscan and the Roman periods, then the arrival of the Langobards.

The city’s relationship with the territory and the water: the floods, the region’s organization between canals and centuriations, the harbor of Pisa, the quarries and the pottery workshops, fishery, agriculture, timber, and how this intense productive activity affected the territory, causing, still in ancient times, its hydrogeological instability.
The extraordinary discovery of 1998, the excavation and restoration site of the roman ships of Pisa.

III. The fury of waters

The plain of Pisa was repeatedly struck by catastrophic floods over the centuries: they were disastrous for the territory, but thanks to the archaeological excavations they allowed a detailed reconstruction of a centuries-old history consisting of ships, finds, and stories of life a trade. Special attention is paid to the archaeological excavation method in a wet environment.
The account of a shipwreck and the story of a friendship: the sailor of the ship B and his dog.

Not only the place where the ships were built, kept and repaired (the arsenals), but the ships in their entirety: how they were built in the ancient world and how they are built today, the modern excavation and recovery techniques and the restoration of archaeological wood.
Reconstruction of the ship A’s excavation site.

The exhibit of the ships and their cargos and equipment, which occupies two aisles of the arsenals, is subdivided into two parts: the first aisle focuses on deep-sea ships, and the second on inland waterway boats.
Exhibits of the Alkedo and its life-size reconstruction. Barges and river ferries: the ship D and the ship I. A ship from Spain.

One of the main reasons for sea travelling was trade: amphorae, used to transport goods, were the main item, along with the containers of all the products sold in the ancient world; the diffusion, import and export of peculiar goods: luxury products, various types of marble, and fine table pottery.
All the amphorae known in Pisa on one wall: shapes, contents and origins.

The Roman ships, with oars and square sails, sailed thanks to a complex maneuvering system; considerable parts of the sails have been found in the excavation site, and they allow a reliable reconstruction of the complex system on which the sails’ structure was based.
The wooden anchor of ship A, the angelfish good luck charm.
Finding your way following the stars.
How long did sea voyages last? Which were the most recurring harbors and routes? Check out our arrivals and departures board.

VIII. Life on board

Voyaging was definitely not very comfortable, for sailors but also for passengers. This section describes the various aspects of this hard life: clothes, luggage, storms, ship’s lighting, how the crew cooked and ate, cults and superstitions, and daily life on board.
What clothes did sailors use to wear? The Alkedo’s leather jacket.
The luggage of a sailor of the ship A: a few coins and a handful of personal items.
What did they do on their free time? Games for children and board games.

The birth of the Arsenals: the Grand Duke’s dream

The exhibition of “Le Navi Antiche di Pisa” takes place in the majestic rooms and aisles of the “Arsenali Medicei” (the Medicean Arsenals), along the Arno river.
This place immediately seemed perfect to host ancient testimonies of the city of Pisa, such as, of course, the great Roman ships. The Arsenals were ideal as they are themselves essential witnesses of Pisa maritime history.
They were built almost 400 years ago by Grand Duke Cosimo I de’ Medici’s will. He wanted to strengthen his naval power and resuscitate the ancient glories of Pisa Maritime Republic. To achieve this goal, he did not stop with the Arsenals: he even founded the Order of Santo Stefano (Saint Stephen) Knights. It was a military order strictly linked to the sea, created as a direct match to the new Arsenals. As a matter of fact, they had their own naval academy close by, in Piazza dei Cavalieri, and that specific building was planned by Vasari himself, whereas most of their fleet was built specifically at the Medicean Arsenals. So, both the Arsenals and the Order were part of one grandiose project aiming to increase the Grand Duke’s naval power. The Knights had to face and contrast the Saracenic expansion over the Mediterranean Sea, as well as to protect trading routes that were tormented by Turkish pirates.

The decadence: from Arsenals to storerooms

The Arsenals in Pisa soon became neglected as new ones were built in Livorno and Portoferraio. However, the final blow to Cosimo’s dream was a change in naval policy. As the State diminished requesting big fleets, the private shipyard branch increased. The Grand Duke’s Arsenals could not attend to private ship building by means of social decorum and this was the reason why no more ships were built in Pisa Arsenals. They became storerooms linked to defensive purposes of the nearby Citadel, a fortress facing the sea.

From ships to horses

That was, nonetheless, not the end of the Arsenals’ story. The building was indeed destined to change its purpose again in the centuries to come. It would not be tied to the sea anymore: as a matter of fact, during the 18th Century the Arsenals have been transformed into cavalry barracks. The “guests” of the stables were not common animals: only the horses of the Dragons, the Lorena family cavalry, could stay there. In 1809 the nuns were dispossessed of their nearby monastic complex of San Vito, which was then included in the cavalry barracks.
Since the unification of Italy (1861) the Arsenals became a center of horse breeding of Savoy State and it remained operational under the Italian Army until 1965.

The Arsenals are a place filled with history, now loaded with new meanings. This place represents the long-lasting relationship between Pisa and sailing thanks to the exhibit of finds, but also to the building itself: it is a symbol of the Grand Duke’s will to revive the times of Pisa a Maritime Republic.
These are all the reasons that brought to the conservation and preservation by all means possible of the structure of the Arsenals. This choice influenced the museum outfitting, especially in the “minor” rooms on the hallway. Here the maintenance of the horse boxes with gates and drinking troughs imposed a splitting of the narration into chapters, thus allowing the visitor to further divide the 8 thematic sections in small moments to be enjoyed step-by-step.
On the other hand, the majestic rooms and the aisles, originally built to accommodate great Grand Duke ships, are now the perfect place to display the wonderful restored ships. Here the grandiose Roman ships are exhibited, as a starting point for the long history of sailing in Pisa, now finding new life inside the rooms of the museum. 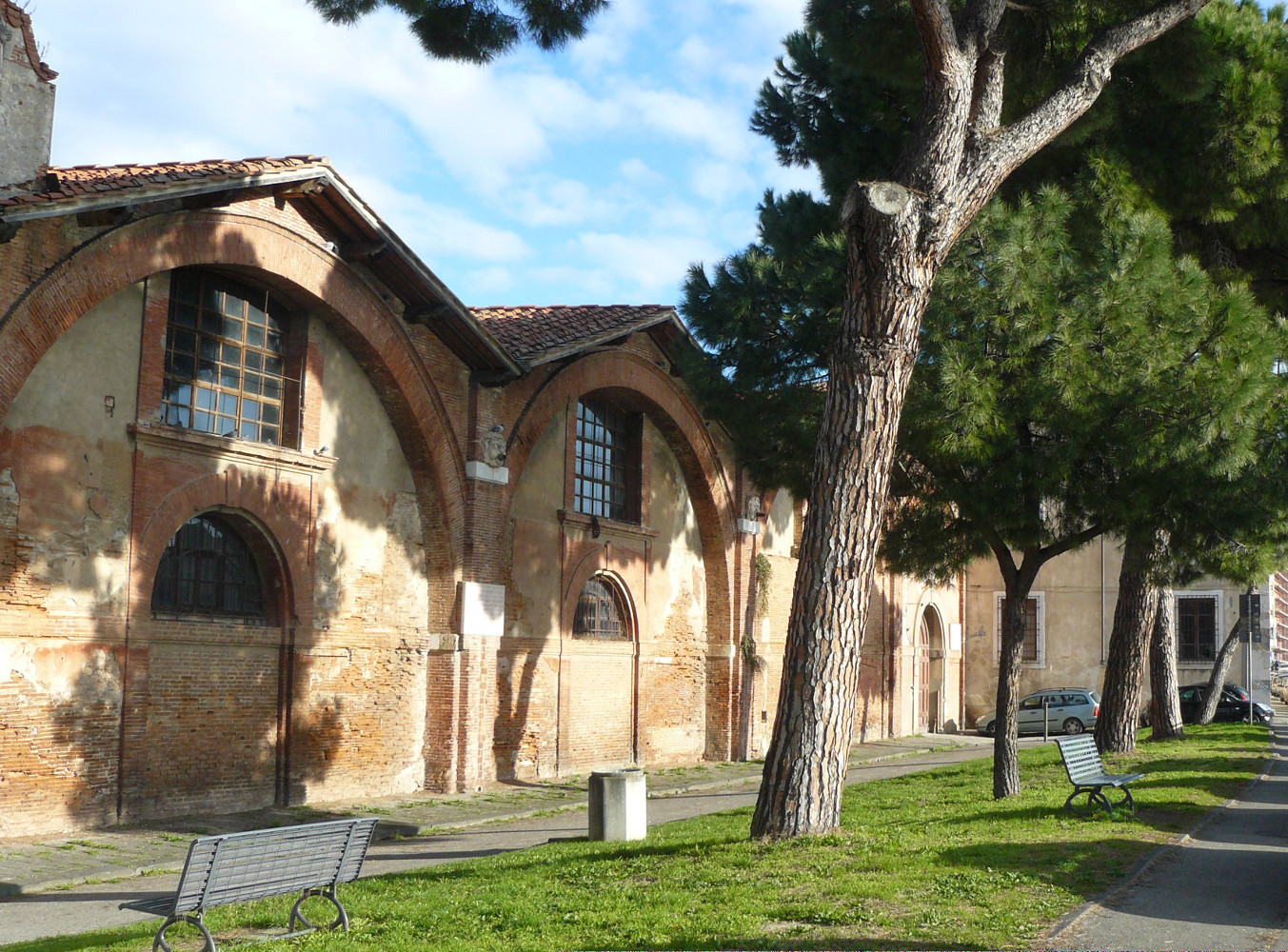 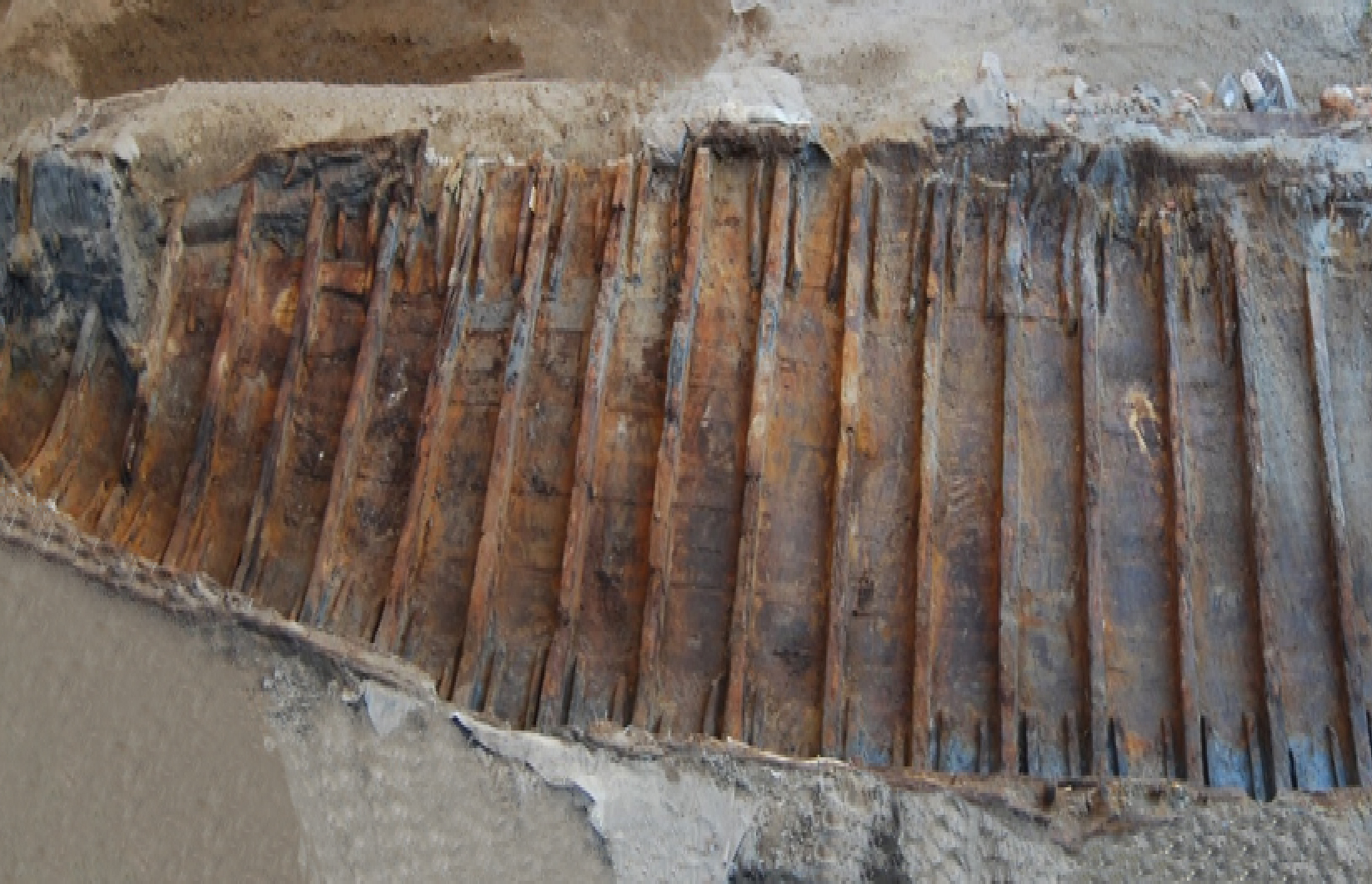 The area of San Rossore

In 1998, in Pisa outskirts towards the sea, the Italian Railways started the construction works to build a control center for the Rome-Genoa line, next to Pisa San Rossore station. Immediately some wooden objects began to be unearthed and the archaeologists realized the immense value of this discovery.
In particular, what emerged 6 meters underground was an incredible series of ship wreckages, including their loads of commercial items and various remnants of life on board, in an extraordinary state of preservation.
The excavation site of Ancient Roman ships of Pisa, originated from this discovery, was completed in 2016 and it brought to light about thirty Roman boats and thousands of fragments of pottery, glass, metal and traces of organic materials. This is one of the most interesting and rich excavation and research sites of the last few years. 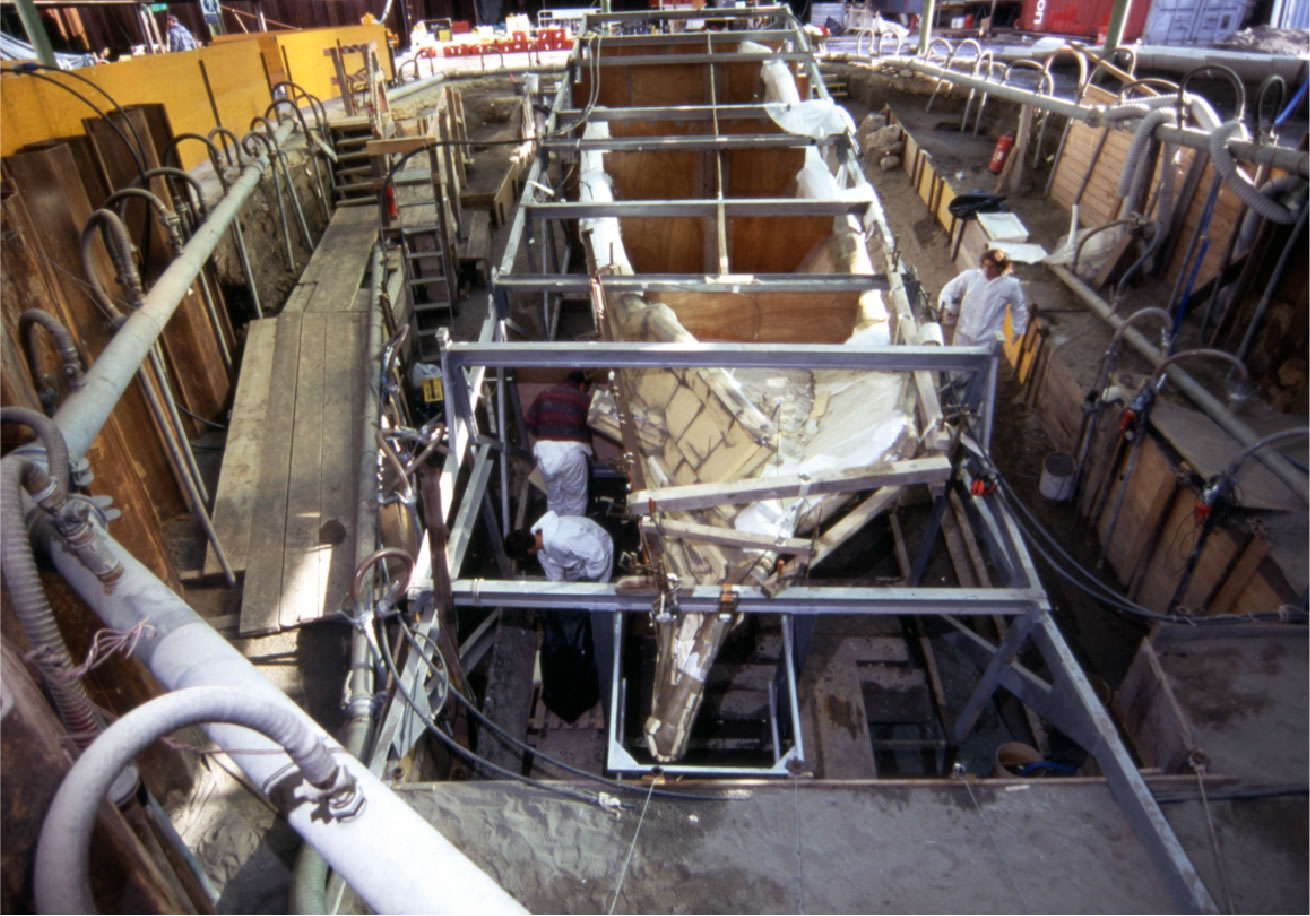 The strenuous work of archaeologists and conservators has recreated the mosaic of a long history, consisting of trades and sailors, voyages and routes, daily life on board and shipwrecks.

The peculiar state of preservation of the finds hidden in clay and sand layers required a considerable economic, organizational and technological effort, providing the researchers with laboratories, storerooms, cutting-edge instrumentation and logistics functional to the recovery of the over thirty wreckages found and the related materials.

The Ancient Ships’ site has thus become a center equipped with workshops, storerooms and equipment, and it has seen the cooperation of tens of both Italian and foreign University and research Institutions.

FROM JUNE THE ANCIENT SHIPS OF PISA CHANGE THE HOURS!

We are waiting for you!